The organ of St. Katharinenkirche in Brandenburg was originally built by Joachim Wagner between 1726 and 1727. The organ had 35 stops on three manuals and pedal. From this time the organ case with the prospect pipes has been preserved.

In 1898 Wilhelm Sauer built a new organ with pneumatic cone chest, III manuals and pedal behind the Wagner prospectus. In 1936 the organ was rebuilt by Alexander Schuke Potsdam. The organ then had 48 stops with 3470 pipes and a new mobile console.

After many years of use in community service, the organ was generally overhauled in 1993 by Alexander Schuke Potsdam Orgelbau GmbH and received a playing cabinet with III manuals and pedal and 64 set combinations.

In the year 2005 the St. Katharinen church received a smaller used organ, which was set up as a choir organ on the south gallery. This II-manual organ with 12 stops is ideal for accompanying singers, orchestras and soloists during devotions and concerts.

The concept of 2018 “Preserve the old, create the new” is now to restore the original console from 1936 as well as the main organ, a new central console and a new console on the main organ (V manuals and pedal), a new auxiliary with 26 stops and glockenspiel on the lower gallery and a new solo work on the north gallery with the extended main organ and choir organ. After completion of the work, the entire organ system will have 96 stops distributed over 5 manuals and pedal. The organ will then have 3 swellings and more than 60 couplers and further playing aids via smartphone and touch screen. 20 of the 96 stops are reed stops. 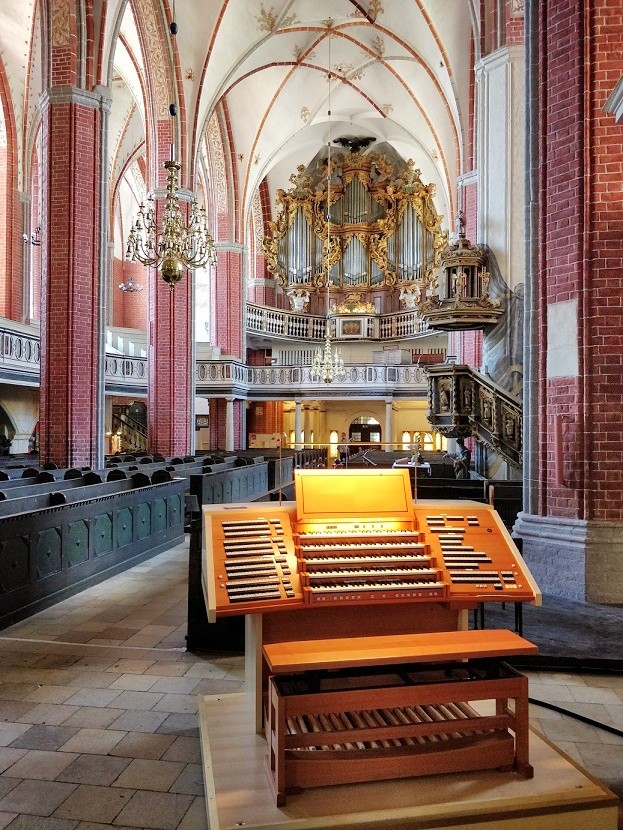